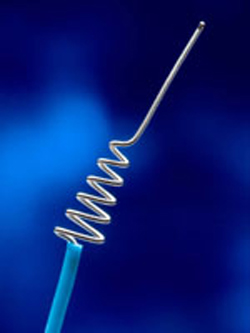 Due to a pair of physicians’ innovation and determination, the removal of potentially fatal blood clots in the brain may one day become standard procedure in hospitals around the world. Concentric Medical, Inc., is doing its part to make the Merci Retriever more effective and more available to stroke victims with no time to spare.

Eighteen-year-old Melissa Welch of California serves as a poster child for the medical intervention that saved her life two years ago. Twenty-year-old Marissa Arnold of Connecticut made national television last year because of the dramatic result achieved by the same clinical device. These young women are just two examples of the thousands who can count themselves lucky.

The enemy in these situations is stroke. The savior is Concentric Medical, Inc.'s Merci Retriever.

The rate of strokes is rising, and according to the American Stroke Association, it is the leading cause of serious, long-term disability in the United States. Stroke is the third largest cause of death, ranking behind heart disease and all forms of cancer, but it is quickly gaining ground as the number two killer.

Close to 80 percent of the 750,000 strokes that occur each year nationwide are ischemic strokes — that is, caused by the blockage of a blood vessel, usually by a clot that forms elsewhere then travels to and lodges in a blood vessel in the brain. It would seem that the clot-busting drug, tissue plasminogen activator (t-PA), can occasionally work miracles. However, it is effective only if administered within a critical three-hour window of time following the onset of a stroke. Also controversial is t-PA's increased risk of a brain hemorrhage.

While a frustrating situation for clinicians who treat ischemic stroke patients, it inspired a dedicated pair of neuroradiologists to invent a tool that offers patients a greater shot at recovery. Just over 10 years ago, University of California, Los Angeles (UCLA) physicians Pierre Gobin, M.D., and J.P. Wensel, M.D., began designing a device that could travel to the site of a blood clot in the brain and actually remove the clot.

Great strides in this concept had already been achieved with coronary arteries. But there are dramatic differences between the heart and the brain, as Gobin attests.

"A blocked coronary artery is caused by plaques that form there and narrow the vessel," he explains. "In the brain it's completely different where in most cases the blockage forms from a clot that travels there from somewhere else in the body. Our idea was that if a clot arrives and lodges in a brain vessel, it could be extracted."

From concept to successful product, today the Merci Retrieval System is comprised of three key components. After a blood clot in the brain is located by angiography, a clinician inserts the Merci balloon guide catheter through a small incision in the patient's groin. Under X-ray guidance, the catheter is then maneuvered up to the carotid artery in the patient's neck, and a guidewire, along with the Merci microcatheter, are deployed through the catheter and into the brain where they are placed just beyond the clot. The third component, the Merci Retriever — a corkscrew-shaped platinum wire — is then deployed to grab and ensnare the clot. After capturing the clot, the clinician inflates the balloon guide catheter to temporarily stop the forward flow of blood while the clot is withdrawn and gently pulled into the catheter and out of the body. Once the balloon is deflated, blood flow is restored through the now open vessel.

The development of the Merci Retrieval System relied on critical support from the UCLA Office of Intellectual Property where Drs. Gobin and Wensel filed a patent on their invention. UCLA invested in the domestic rights and Dr. Gobin, believing strongly enough in the device to share the financial risk inherent in patenting such early stage technology, took over the foreign rights. While searching for the right partners to create a spin-off company, Dr. Gobin remained committed to his mission and succeeded in finding interested investors and obtaining venture capital. In 1999 he launched the company Concentric Medical.

"This was a good example whereby the inventor's dedication and persistence on the commercial front paid off," says UCLA Office of Intellectual Property's Director of Licensing Emily Loughran. "While we maintain an active network of potential industry licensees there is no substitute for having a motivated and involved inventor teaming with our efforts. Inventors are often the best source of industry contacts and are the most appropriate individuals to serve as the catalyst for the formation of a startup around the technology, as was the case here."

Concentric Medical spent its infancy in a San Francisco Bay Area incubator called the Foundry. According to Gobin, the Foundry was an excellent place to start a company, as it provided engineering expertise and funding. As the company gained financial support, the design of the Merci Retriever continued to improve. A preliminary safety trial of the device was underway within a few years, and the results paved the way for the launch of a pivotal clinical trial.

A veteran business mind with expertise in developing new medical device companies, Gary Curtis came on board as president and CEO of Concentric Medical in 2002. At this critical time the company needed additional venture capital to fund a clinical trial and move forward with commercialization of the Merci Retriever. With more than 35 years of experience in the startup medical device arena, Curtis has played a valuable role in the commercialization of numerous major medical tools including total hip replacement and interventional cardiovascular devices.

Now headquartered in Mountain View, Calif., Concentric Medical is still privately held and benefits from an impressive number of major investors, including New Enterprise Associates, ProQuest Investments, Oxford Bioscience Partners, and Schroder Ventures Life Sciences. Curtis says the company has achieved a revenue rate of approximately $1 million a month; he expects to be doubling that and approaching profitability by the end of this year. "We focused on the U.S. marketplace for my first four years, and we're just starting to explore international markets and opportunities," he says. "We have many hopes and expectations."

The 65 employees of Concentric Medical feel fortunate to be part of a company that is truly saving lives. A major milestone occurred in 2004 when the Merci Retrieval System was cleared by the U.S. Food and Drug Administration, making it the first ever FDA-approved medical device for removing blood clots from the brains of ischemic stroke patients.

"With the approval of our product and the development of such interventions, we now help about 250 patients per month," says Curtis. "It's a very rewarding way to come to work each day."

Since the approval of the Merci Retrieval System, there are now close to 250 hospitals in North America that have the product on their shelves, as well as trained clinicians able to use it for treating patients. Curtis estimates that since the device has been available, it has treated about 4,000 patients through clinical trials and interventions. Studies of the Merci Retriever have shown that if blood flow is restored to stroke victims within an eight-hour window of time, then half those patients will regain functional independence within 90 days. Without the means of such an intervention, only one out of 32 people suffering a stroke achieve that independence.

"We really consider Concentric Medical to be one of our big success stories," says Loughran. "For very early stage technologies such as the Merci Retriever, the number of products that not only make it through FDA approval but are then actually widely used are few. We're excited to see this become one that is so valuable for the management and treatment of stroke."

Unlike the majority of stroke victims who either die or suffer permanent disability, Melissa Welch and Marissa Arnold were fortunate to enjoy a full recovery. Welch was home from the hospital a week after her stroke just in time to spend Christmas with her family. Arnold was back to her full course load and playing varsity soccer as a junior at Mt. Holyoke College in South Hadley, Mass., just two weeks after her frightening episode. The design, development and commercialization of the Merci Retriever serves as a stellar example of how successful technology transfer to the marketplace is making our world a better place.

With the approval of our product and the development of such interventions, we now help about 250 patients per month