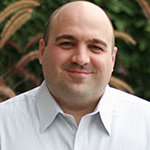 Brian Roe, director of the industry research and material transfer team at the UCLA Technology Development Group, died March 23.             He was 41.

A member of the the group since 2008, Roe was dedicated to his work as an industry contracts officer and by 2012, he was promoted to director. In this role, Roe oversaw the operations of Industry Sponsored Research and Material Transfer, a team of 12. He helped navigate the potential risks and complex transactions that come with the industry partnerships that support UCLA’s research ecosystem.

Some of Roe’s major achievements included leading the collaborations between Apple and the UCLA Depression Grand Challenge and the UCLA and Amazon Science Hub for Humanity and Artificial Intelligence.

“Brian will be sorely missed by peers and faculty alike,” said Amir Naiberg, associate vice chancellor, CEO and president of the UCLA Technology Development Group. “In recent years, his leadership brought significant achievements and new highs to UCLA’s collaborative work with Industry. He will be missed, but the results of his work will be with us for many years to come.”

Roe was an avid sports fan who played high school football and was a triathlete. He earned his bachelor’s degree in political science from UC San Diego and his law degree from Loyola Law School.

He is survived by his mother, Irini Pappas, his stepfather James Pappas and his younger brother, Nick Pappas.

In lieu of flowers, the family requests that donations be made in his name to the Los Angeles-based AIDS Healthcare Foundation.