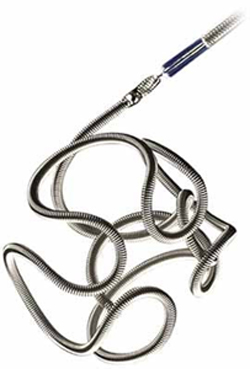 Brain aneurysms are usually symptom free while they are developing but are devastating when they finally make their presence known. Most of these bulges in the arteries of the brain remain undetected until they've swollen to the point of bursting and begin smothering brain cells with free-flowing blood.

Only a small percentage of people with brain aneurysms experience ruptures, but as many as 50 percent of those whose aneurysms do burst die before reaching the hospital, according to figures compiled by the nonprofit Brain Aneurysm Foundation. Half of those who get to the hospital go on to die within 30 days, while survivors often suffer from brain damage and lingering disability, the foundation notes.

Conversely, some patients receive prompt care with minimally invasive detachable platinum coils. While surgery is sometimes appropriate, coils avoid the need for physically opening patients' skulls to access aneurysm sites. Threaded with extreme care through the arteries by highly trained and skilled interventional neuroradiologists, the soft, flexible coils are packed inside the aneurysm pockets to close them off, ending the danger of continued bleeding.

The best possibility is for the procedures to be performed preventively, before the aneurysms actually rupture. Usually, however, the aneurysms' presence is discovered only by accident, during tests for other problems.

Somewhat resembling tiny slinky toys, detachable coils are comprised of spiraling wires thinner than strands of hair. Platinum is used because it is visible to a fluoroscope, is flexible and can assume the shape of the aneurysm it fills. Delivered through catheters inserted into the arterial systems, the coils are detached by low-voltage electrical currents that dissolve the connection between them and their delivery wires.

"Before coiling was approved in 1995, the best tools we had for treating aneurysms were either surgery that involved removing a section of skull or the use of balloons we could inflate within the aneurysm to try to fill it," says Fernando Vinuela, M.D., director of interventional neuroradiology at the University of California Los Angeles' (UCLA) Ronald Reagan Medical Center. He was a member of the team that invented the Guglielmi detachable coil (GDC), named for Guido Guglielmi, M.D., the Italian physician who led the project.

"Balloons weren't a satisfactory solution because they didn't adjust to the shape of the sac. The Guglielmi detachable coil proved to be a superb technology — soft and flexible, forgiving, with a low complication rate. The Matrix detachable coil, approved a few years ago, accelerates the clotting process with a biopolymer coating."

Since the GDC's approval for commercial sale by the U.S. Food and Drug Administration (FDA) in 1995, coils have been used on more than 500,000 patients worldwide, Vinuela notes.

One in every 15 people develop brain aneurysms during their lifetime, according to the American Society of Interventional and Therapeutic Neuroradiology (ASITN). Aneurysm bulges grow at weak spots in arterial walls, believed to be promoted by risk factors as diverse as smoking, hypertension, infection and traumatic injury. A tendency for the development of brain aneurysms can be inherited, so family history is also a risk factor.

As many as 3 percent of those aneurysms rupture, resulting in a total of more than 30,000 people who are affected in the United States each year, the ASITN organization says.

The most common type of brain aneurysm is a sac attached to the artery by a neck, or stem. Often, this develops within a "vee" where one artery branches off from a larger one. The danger is that a burst aneurysm lets blood flow into the subarachnoid space surrounding the brain — a subarachnoid hemorrhage that damages brain cells and, if severe enough, leads to death.

"Sometimes, bleeding from a rupture stops fairly quickly — a warning leak — giving us a window of opportunity for treatment," Vinuela notes. "A burst site needs to be treated as quickly as possible to prevent additional rupturing. When additional rupture occurs, the mortality rate is about 75 percent.

"It's even more desirable to treat aneurysms before they burst, if possible," he adds. "Most unruptured aneurysms are found in the course of brain MRI or CT scans for other concerns. The complication rate for closing them off is very low, and treatment is well-justified in many patients."

The development of the detachable coil began with Guglielmi's arrival in 1989. His father had died of a brain aneurysm and he wanted to find a way to deal with the disorder. Lacking the resources in Italy, he came to UCLA. His original idea was to use a powder to seal aneurysms off by causing the blood inside them to coagulate.

"I formed a research team involving Guido, Ivan Sepetka and myself in order to develop the first prototypes to be used in ruptured aneurysms," Vinuela notes. Sepetka was an engineer with Target Therapeutics, a medical device company.

Guglielmi ultimately dropped the idea of developing a powder, and, at Sepetka's suggestion, the group began working with the soft, platinum helical coils. Following animal tests, their first human case was a patient in 1990 with an aneurysm involving the cavernous sinus — nothing in contact with the brain. "We were elated with the results," Vinuela says. "We presented our work to the American Society of Neuroradiology that year."

Approved for use by the FDA in 1995, the Guglielmi detachable coil was licensed to Target Therapeutics (which was acquired by Boston Scientific Corp. in 1997), notes Emily Loughran, director of licensing at UCLA. Guglielmi and Sepetka were determined to be the inventors and were named on the patent.

"Since then," Loughran says, "numerous companies have developed coils — today, there are more than 140 versions in varying sizes and characteristics. But the GDC has been the gold standard."

Published in 2002, the International Subarachnoid Aneurysm Trial, a large-scale study of ruptured aneurysms in patients equally suited for coiling or surgery, found a 22.6 percent lower relative risk of death or significant disability after one year for patients treated by coiling. A follow-up study published in 2005 found that the benefit continues for at least seven years after the procedure. It also found that, while the risk of repeated bleeding is low with both techniques, it is slightly higher with coiling.

In fact, recanalization, or reopening of the aneurysm, was identified as a problem early on. "By the end of the '90s," Vinuela says, "we recognized that 18 to 21 percent of aneurysms were recanalizing — that is, their stems were reopening — particularly large ones with wide necks."

Illustrations of coils in aneurysms usually depict them as completely filling the sacs, but actually they generally occupy no more than 30 percent of the aneurysms' volume. The rest is filled with clotted blood. When an artery's blood flow is strong, the pressure can push a coil from the neck into the body of the aneurysm, allowing blood to flow back into the sac and presenting the risk of re-rupture.

Faced with these issues, the UCLA team went back to the lab and changed the size and radial force of the coil. "Beyond this," Vinuela notes, "we started looking at more sophisticated changes we could make to the GDC." By the mid-1990s, Guglielmi had retired and returned to Italy, but Vinuela worked with fellow UCLA neuroradiologist Yuichi Murayama, M.D., to refine the GDC.

"Drs. Vinuela and Murayama coated the GDC with a biopolymer material," Loughran says, "a polylactic acid that accelerates inflammation within the aneurysm. It speeds up clotting, eventually degrades and is absorbed by the body. By 1998 they had perfected a new, coated version called the Matrix detachable coil."

While development of the Guglielmi coil was supported by Target Therapeutics, the Matrix coil was developed with National Institutes of Health funding. With Vinuela and Murayama designated as the co-inventors and named on the patent, the Matrix device was licensed to Boston Scientific in 2000.

"With these changes in size, strength and materials," Vinuela says, "the recanalization rate is down to 9 percent. At the present time, endovascular technology has dealt very well with small aneurysms."

Surgery is still necessary for many brain aneurysm cases, but at medical centers like UCLA, the majority are treated by coiling — in Europe, coiling accounts for more than 90 percent of treatments, according to Vinuela. In large part the choice of the approach depends on the type and location of the aneurysm, the patient's general health and the patient's preference.

New techniques are being explored for large aneurysms. One innovation uses balloons to divert blood flow from the aneurysm while coils are placed within it. Another technique utilizes combinations of stents and coils. However, the newest idea is to use stents by themselves as flow diverters for very large aneurysms so as to stimulate clotting without the use of a coil at all.

"These factors are good for both patients and our society. A study in California found both adverse outcomes and hospital costs to be considerably lower with coiling than with surgery."

Vinuela adds: "We started working on these devices 30 years ago and I don't remember stopping for a minute. It's been an extraordinary, unique experience.

"Most importantly," he says, "we can look back and see that these devices have helped half a million people, all over the world, cope with problems that otherwise would have been fatal or disabling to many of them. That's a good feeling."

"Balloons weren't a satisfactory solution because they didn't adjust to the shape of the sac. The Guglielmi detachable coil proved to be a superb technology — soft and flexible, forgiving, with a low complication rate. The Matrix detachable coil, approved a few years ago, accelerates the clotting process with a biopolymer coating."