Assessing PTSD in Children and Adolescents 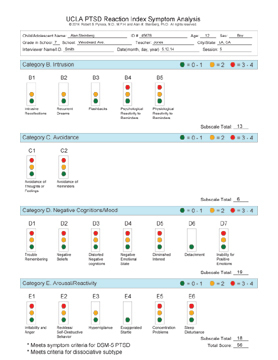 UCLA researchers developed one of the most widely used tools for assessing trauma history and posttraumatic stress symptoms.

“Trauma challenges an individual’s view of the world as a just, safe, and predictable place.” -APA

It is hard to imagine a more fitting context to the above quote from the American Psychological Association (APA) than the events that took place on September 11, 2001. While that day challenged us all, it can be particularly troubling to turn our attention to some of our most vulnerable members of society – our children. Soon after 9/11, two UCLA faculty members recognized that major revisions needed to be made to the UCLA PTSD Reaction Index for Children and Adolescents, one of the most widely used instruments for assessing trauma history and posttraumatic stress symptoms among traumatized children, adolescents, and young adults. In doing so, Drs. Robert Pynoos and Alan Steinberg of UCLA’s David Geffen School of Medicine developed a tool that has exemplified the positive impact on society that stems directly from university-derived innovation.

As with many psychiatric conditions, the symptoms of PTSD can vary. For example, some children will repeatedly replay the traumatic event in their minds, causing persistent anxiety. They may believe that they are witnessing signs that another trauma will repeat itself, and live in a stressful state anticipating another impending catastrophe. They may severely restrict their behavior in an effort to avoid things that remind them of what happened. Other children show signs in the way they play. Here, children have been known to play shooting games after witnessing school shootings.

The ability to assess a wide range of factors is important for evaluating PTSD and designing a treatment regime. Symptoms can last for years if left untreated, leading to behaviors such as aggression, out-of-place sexual behavior, self-harm, and substance abuse. Importantly, PTSD symptoms can undermine healthy developmental progression. Understanding details of a patient’s trauma history and accurate diagnosis of their condition can help specify personalized treatment options, such as trauma-focused cognitive-behavior therapy, parent-child interactive therapy, eye movement desensitization and reprocessing (EMDR), play therapy, or other treatments.

Drs. Pynoos and Steinberg’s UCLA PTSD Reaction Index has been translated into many languages, and has been licensed to over 500 mental health agencies across the globe – from California and across the United States, to Europe, Asia, and Australia. From major hospitals to small family clinics and research institutions to non-profit counseling centers, this tool has improved the capabilities of thousands of mental health practitioners while positively affecting the lives of tens of thousands of young patients.

The Alum Rock Counseling Center in San Jose, California is an example of such an organization. Since 1974, ARCC has been working with high-risk youth from East San Jose. The goals of this grassroots organization are to address the damage of disenfranchisement, family conflict, school failure, and delinquency of this youth population. “We just had a clinician complete the first one for this version yesterday and the scoring software was really great,” reported Michelle Coufal, the Outcomes and Evaluations Manager at ARCC. “The profile is so easy to read and we really appreciate not having to hand score these, it’s such an incredible time saver.”

When it comes to university technology transfer, patents for engineering processes and new therapeutics typically steal the show. But the UCLA PTSD Reaction Index demonstrates that intellectual property is generated across a broad spectrum of research domains and that impactful tools for improving society come in all shapes and sizes.

It is unfortunate to realize so many children will be exposed to trauma in their early years, but it would be wrong to reject reality. By improving the way we identify and mitigate PTSD in children and adolescents who have been exposed to these events, UCLA researchers are doing their part in improving patient care and re-igniting that zest for life that is ubiquitous in children worldwide.