Or
Explore This Section 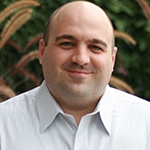 Brian Roe joined UCLA TDG in 2008 as an Industry Contracts Officer. In 2012, Brian was appointed Director of Industry Sponsored Research where he oversees the operations of TDG's Industry Sponsored Research and Material Transfer Teams. Before coming to UCLA he spent two years with UC San Diego in their Office of Contract and Grant Administration. Brian received his law degree from Loyola Law School in 2006 where he was a member of the Loyola of Los Angeles Law Review. His undergraduate degree is from the University of California, San Diego, where he majored in Political Science.